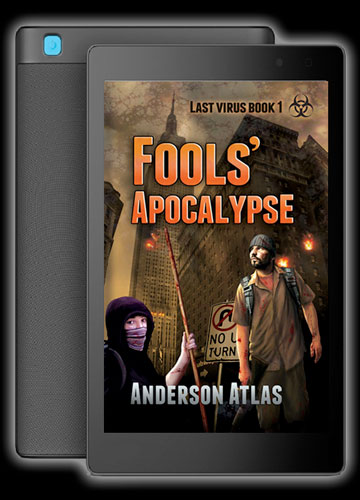 This Last Virus book one is written by Anderson Atlas, and he promised me that I would be hooked after the first chapter. Since I thought that I am a hard person to please, and it would have been a pleasure to make this post a rant to put him in his place. Well, either way it was that or enjoy the book right? I have nothing to lose. The cover is illustrated by the author as well, I must admit that they are a lot of hints on the cover that is only understood once you read the book.

Such as the No U Turn…

First, the story starts with a series of events with a slightly jumbled time line. The book is written in third person point of views, but the timeline is roughly about the same. I think everyone except for Markus, whose story starts a lot earlier. After that, the characters converge into one, featuring the main core of the story. There was a virus that killed a lot of people, and somehow created things that are called Puppets. The story does not focus on that yet, so the characters and me are kinda clueless about what they are.

Fool’s Apocalypse is more about the events that lead to the almost extinction of mankind. Zilla was the main planner, and the people who executed are the soldiers of the cause. Hence, this one person has brought about the end of civilisation, using naive people who never stopped to think or question. If there’s chills running down your spine, you know that this happens in real life too. I suppose this book has a lot of similarities to the real world scenario right now. All it takes is one charming maniac who spits out the right words, and all hell breaks lose.

Ian was the guy that I remembered most, Hannah the cop came a close second. They were idealistic, and both wanted to make the world a better place. There are a few more key characters in the book, but sadly I cannot recall their names as yet. All the characters are distinctly different with a unique skill sets. Hannah can shoot of course, being a cop makes her think more strategic. Ian however, is a writer and a politician’s son, hence he is quite a diplomat when he wants to be.

Zilla is the one who dominates the whole of Fool’s Apocalypse, his identity unknown until close to the end. That is when readers find out how Zilla had managed to manipulate people into creating this mess of a situation. I applaud Zilla’s masterful mind, but secretly hope that someone stabs him in the chest before he does something worse, like … blow up the planet.

I enjoyed Fool’s Apocalypse, definitely worth the read. And please don’t read it during Christmas time it can destroy an appetite.