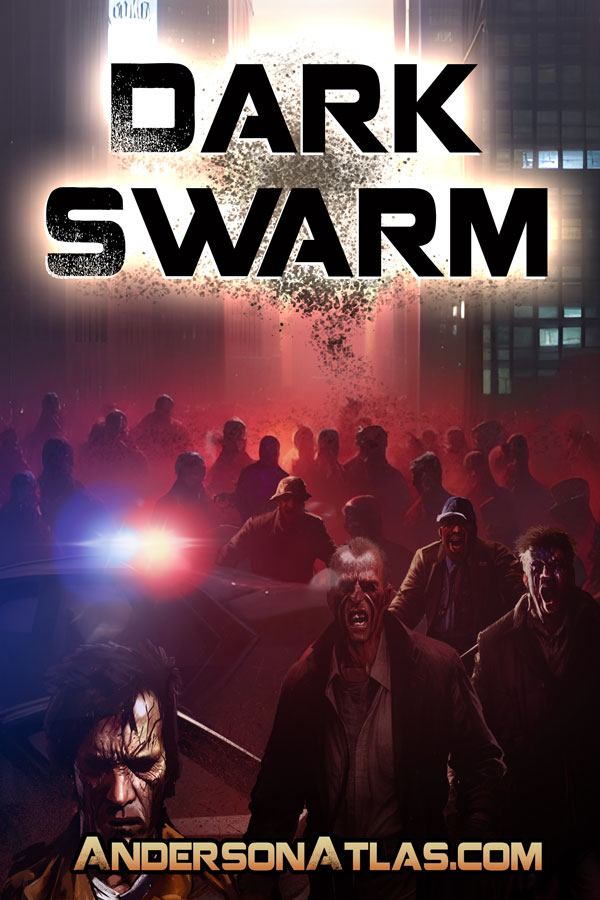 A violent force descends on Earth, threatening human sovereignty initially recognized as a viral outbreak. Jayce Morrison is infected but quickly becomes the most important person on Earth–able to read the Dark Swarm communications until the darkness overcomes him, turning him into a soldier for the enemy. Time is running out as his thoughts betray him.

“As engineers, we are going to be in a position to change the world – not just study it.” ~Henry Petroski

Jayce Morrison jammed his joystick left, right, up, smashing the button until his thumb hurt. “Almost at the checkpoint! I’m so nervous. We’ve never done this good.”

“Behind you,” Mire Yi Min yelped. She was Jayce’s best friend and the only surviving member of his raid. “If you die, I will kill you.”

“I know!” Beads of sweat rolled down Jayce’s face, but he wouldn’t dare take his hand off the controller to wipe his brow. “My hands are so slippery. I hate sweating. Is my controller waterproof? I don’t know!” His nose was nearly pressed up against the monitor.

“Yeah, I know. You’ll kill me.” Jayce released the power-pack. He piloted his ship through tunnel markers, blew up enemy sentries, dodged rockets all in a colorful cacophony of simulated space espionage. “One…more…checkpoint. We’re gonna clobber these fools.”

“Never count chicken feet until after the hunt!” Mire’s ship caught up to Jayce, brimming with a rainbow aura from the power-up.

“I don’t think that’s a saying. It’s ‘don’t count your eggs until they hatch.’”

“That makes no sense. What’s wrong with counting the eggs?” Mire argued.

“I said it wrong. I’m…a bit distracted by all…these…mines.” Jayce jerked from side to side mimicking his spacecraft’s dodging and turning. “One more boost!” Jayce slammed the key–

A squeal ripped through the evening air followed by a metallic shriek and deep crash. The computer went dead along with the house lights.

Jayce cried out, spilling from his rickety old desk chair. “No!!!” The entire house had no power.

Jayce fished in his desk drawer. “I hate the dark. It’s so…dark.” He found his flashlight and turned it on, sighing with relief.

“What the hell!” Mire snapped. “We’ve been trying to get to Beta Nine for six months. Why’d your computer decide to take a crap right now?”

“I think there was an accident on the street,” Jayce said. Even if the sun was still up, he couldn’t see through the security bars and the bent, yellowed, dust-covered blinds.

“That’s what that bang was? I heard it right before the connection died.”

“Loud bang. Must be bad.” Jayce turned the phone’s flashlight function on and slipped out of his room. He flicked light switches, futilely, as he reluctantly went down the steps to the front window. He parted the curtains and let his eyes adjust to the moonlit, star covered night. “Oh, dang. The whole block is dark.”

“Was there a wreck?” Mire asked, an eagerness in her tone. “Show me.”

Jayce turned the phone to look out the window. “A car must have plowed through Mrs. Theodore’s gate,” Jayce said. He could see two red tail lights blinking in the dark. The car had plowed over the mailbox, flattened the ornate metal gate and smashed into the old tree, which enormous canopy dragged down the nearby power pole.

“I don’t see anyone moving. It’s dark though.”

“Where are you going? We’re not supposed to leave the house, Dad said,” Jayce called out, but Darius was already through the doorway.

“Your brother’s right,” Mire said. “If someone’s hurt you gotta try and help.”

Jayce backed away from the window. “It’s epic-dark out there.”

Mire chuckled. “Nothing in the dark that isn’t in the light.”

Jayce edged through the door and down the front steps. “You know out homeless camp in the empty lot next door. There are crazy people there…being crazy.”

“You’re sooo good with words, you know. Like a poet,” Mire laughed. “Really, the only reason we’re friends is that you’re killer at Star Racer.”

Mire added, “That was sarcasm.”

“I…I know.” Jayce didn’t typically get Mire’s humor, but he wanted to. She was cool and he assumed her confidence would rub off on him because he was clearly born without any.

“Go, Jayce!” Mire yelped playfully. “See. Inside that geek body are some guts.”

Jayce dashed across the street, his eyes wide, nerves on edge.

Darius wrenched the car door open, making a loud crank. “Hey, buddy. You okay? I called the ambulance, but this is K-side territory. They have their own people that run in here. Might take a bit longer. Just hold on and stay calm.”

Mrs. Theodore shuffled toward Jayce, intercepting his hesitant entrance to the scene. “My neighbor is waving me down,” Jayce whispered.

“I need your help,” Mrs. Theodore called out, her voice urgent.

“What the hell does she want?” Mire asked. “Does she even know someone crashed into her tree?”

Jayces cell phone died. “Mire? You still there? Mire?” Jayce’s entire body constricted with fear. He glanced at his phone. I gotta get home. I can’t help anyone here. He couldn’t see very well at all; barely Mrs. Theodore, the car crash or Darius.

“Power got knocked out. Are you hurt?” Jayce asked, looking around like a mouse in an alley full of cats. He wanted his feet to turn his body around and hustle him back home because his brain couldn’t manage it. “We… called the ambulance. One should be coming soon. Can I help you…uh… get back inside?” His chest tightened, a typical reaction to things unknown. Jayce took out his trusty inhaler and took a puff.

“I…I’ve locked myself out of my house it seems.” Mrs. Theodore reached out and took Jayce’s arm. Her hand was cold and boney like a rubber glove stretched over sticks.

“Hey, bro. This guy is knocked out and bleeding.” Darius eased the hurt man out of the car and laid him in the grass. “Go home.”

“Get her inside then go home. I got this guy. He’s hurt pretty bad. I’ll stay with him until the ambulance comes.”

“Hey.” Jayce yanked his arm lose. “You okay?” His face flushed with sweat and his pulse quickened, a temporal pounding drowning out all other sounds.

A noise from the neighbor’s yard startled him, movement from within the shadow’s shadow. He felt surrounded, but couldn’t be sure he wasn’t seeing things. I hate this. I’m never going outside again. The heck is wrong with this sack of wrinkles, anyway?

Mrs. Theodore slumped at the shoulders like a withering plant, then her head snapped up and she leaned to Jayce, eyes wider than physically possible.

The whites of her eyes filled with black liquid, covering even her pupils, an inky darkness like two very deep holes.

Oh the hell is going on?

Mrs. Theodore seized Jayce’s neck, her grip tight, then she head-butted him, splitting his lip wide open, knocking his glasses crooked. Jayce pulled free and shuffled backward, turning to run. Blood filled his mouth, trickled down his chin. He straightened his glasses, squinting to see better in the dark.

Two men, one in a black suit and tie, the other in board shorts and t-shirt approached from the opposite side of the street, eyes also black. They stumbled, growling, gurgling, hunting as though possessed by animal spirits that knew nothing of the waking realm.