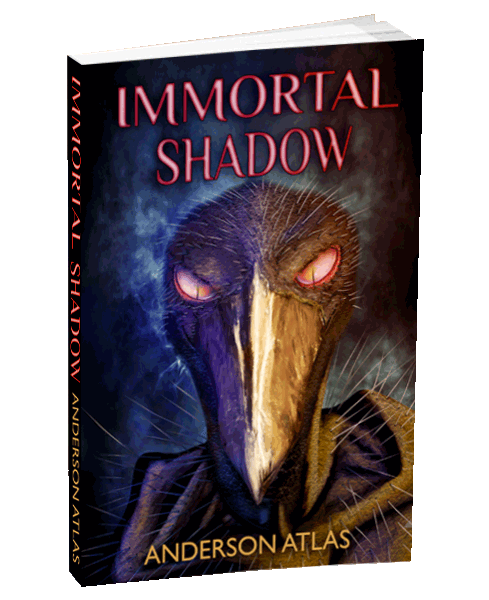 “Immortal Shadow is mesmerizing fiction and a worthy successor to the first two books in the series. It’s most highly recommended.”

Immortal Shadow: Heroes of Distant Planets, Book 3 is a young adult fantasy novel written by Anderson Atlas. Jibbawk and his twelve competitors, who were all Shadoc slaves, were facing challenges that could lead to their deaths or serious injury, but, for one triumphant winner, a victory could lead to dominion over a planet. Jibbawk had trained assiduously for this event over the long years he had spent as a slave. He was faster, stronger, and more determined than any of the others — and he was of royal blood. His destiny was to dominate others. Each challenge was harder than the previous, but he prevailed over them all, meeting and exceeding the requirements of the elders. There would have been no question who had bested the opposition had there been any survivors left, but Jibbawk stood alone before the thousands of Shadocs assembled there. Cal-Kaw and Isawk, the elders who presided over the challenges, acknowledged Jibbawk’s triumph and granted him dominion over Lan Darr. It was a planet rich in resources, including a subjugated and functioning native population. Jibbawk’s prize was just the start for his grand plans, but it would serve him well for now.

Anderson Atlas’s young adult fantasy novel, Immortal Shadow: Heroes of Distant Planets, Book 3, immerses the reader in a universe where interplanetary travel is facilitated through the pollen of a flower that has acclimated itself to each planet. Atlas provides enough background to allow this book to be read on its own; however, I would strongly recommend reading the books in this series in order. The first two books focused on Allan Westerfield, a young athlete turned paraplegic as a result of the car crash that claimed the lives of his parents, and his travels to the worlds accessed through the pollen of the Hubbu flower. Immortal Shadow expands the reader’s familiarity with Jibbawk, the arch villain of the preceding books, and introduces another teen, Adam, who is Jibbawk’s unwilling advisor as he reshapes and modernizes Lan Darr. Immortal Shadow is mesmerizing fiction and a worthy successor to the first two books in the series. It’s most highly recommended.